There has been increasing interest in dental calculus as a source of information on early diet, lifestyle, and environment. A significant portion of this research has reported phytoliths trapped in this context, although they are less commonly reported than starch granules. Dental calculus is a unique context for the preservation of phytoliths as it has a biologically constrained deposit size, unlike sediment or residues. Dental calculus deposits in humans vary enormously in size but they typically occur as a band on teeth closest to the salivary glands such as incisors. These bands are typically less than 5 mm thick but occasionally can be 20 mm or thicker. Unsurprisingly, multi-cellular phytoliths which often occur as sheets hundreds of microns long are rarely reported in dental calculus as they presumably would be removed from the surface of plaque by the tongue or a dental hygiene aid before calcification may occur. Where they occur they are often relatively small fragmented examples less than 100 microns (Jovanović et al 2021). However, research has not clarified whether dental calculus is a size-biased context, which could determine its phytolith representativeness. Research by the author has been shown it is biased in favour of the preservation of palm phytoliths (dimensions average length= 9.2, width=7.7 n=1036; Power et al. 2015), while it under preserved tracheids, common in the local diet, this may relate to palm phytolith size, their unusually resistant chemical makeup, or it may be simply that their echinates more readily stick to dental plaque. Research is needed to establish drivers of phytolith incorporation into dental plaque. 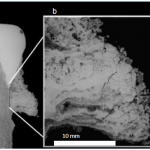 1 thought on “Is human dental calculus a size- or shape-biased phytolith preservation context?”

The FAIR Phytoliths project is getting started

Phytoliths in the Flora of Ecuador Project: updates!

CALL FOR PAPERS on plant silicon and phytoliths