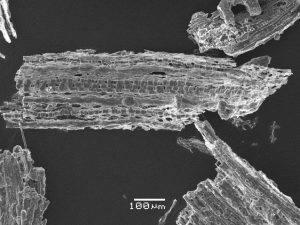 Silicon role in various reactions in the Critical Zone has been studied for a long time. For example, Si is known for being able to alleviate metal stress in plants in many ways. While the role of phytoliths in the cycling of major elements like Si has been already described, their contribution to heavy metals (HM) bioaccumulation in plant tissues remains unclear. This study aims to put in evidence the elemental composition of phytoliths directly linked to the geochemical conditions of the local area in order to explore the potential role of phytoliths in HM sequestration.

Results show that Arundo donax and Phragmites australis tend to accumulate Cd, Sb and Sn but limit the uptake of As, Cu, Mn, Pb and Zn in plant shoots despite that the concentration of these HM in soil is quite high. Therefore, reeds appear as tolerant to high metal concentrations in soils, and phytoliths are identified as preferential structures for encapsulation of As, Cu, Mn, Pb and Zn, while Cd, Sb and Sn were mainly found to be accumulated in organic tissues rather than in phytoliths. Moreover, although phytoliths account for only 3% of the plant biomass, the large difference in Zn content for example between plant shoots and phytoliths (one order of magnitude or more) makes phytoliths a significant compartment of accumulation (about 45 % of total Zn).

Further studies are in progress investigating metal speciation in plant phytoliths, because discovering how HM are sequestered in reed phytoliths will help to understand how the plant copes with metal toxicity, and if this sequestration in a biomineral is durable. Such information has also relevant implications for the management of contaminated soils and the use of phytoliths as paleo environmental proxies.

Open position at the Leibniz Association in Müncheberg, Germany