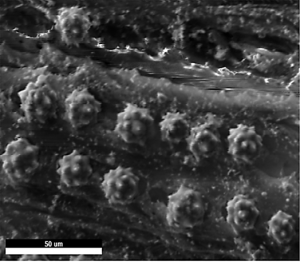 Silicon is taken up in the form of silicic acid by roots, where the silica is deposited or translocated to the above-ground tissues. Shoots – stems, leaves, flower and fruit parts, are usually considered as the main Si deposition sites. In some species roots may also accumulate considerable amounts of Si. There have been identified three basic modes of Si deposition in the roots: impregnation of tangential endodermal cell walls, formation of Si-aggregates in endodermis with interaction of cell walls, and Si-aggregates in specific cells called stegmata that are associated with sclerenchyma fibres. Silica deposition has been studied intensively since the 19th century and noticeable progress has been achieved. In the roots and shoots, silicon is polymerised in the form of amorphous silica. With the development of molecular-biology methods, several silicon proteins have been found to mediate passive or active Si transport. These findings contributed to the overall understanding of silicic acid transport, and based on homologous sequences of Si transporter genes, Si transport proteins have been found in many species through the plant kingdom. Silicon that belongs to beneficial elements in plants, plays a functional role in mitigation of negative effect of several abiotic and biotic stresses and this effect is expressed both in root and shoot.

Open position at the Leibniz Association in Müncheberg, Germany